More than 20,000 AT&T workers on strike in the Southeast

More than 20,000 AT&T wireline employees in nine southeastern states have gone on strike, protesting what they say are unfair labor practices. According to the Communications Workers of America union, those include sending representatives to union negotiations who are not authorized to make decisions. One Florida union chapter also reported “threats of discipline and prevention of concerted work activities.” 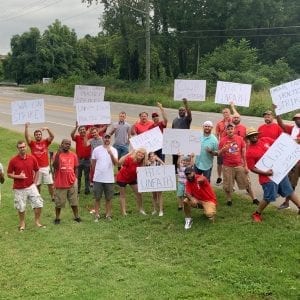 AT&T for “not bargaining in good faith.”

According to public statements from AT&T, the Southeast contract covers fewer than eight percent of AT&T’s employees.

On Saturday afternoon, AT&T spokesperson Jim Kimberly released a statement to Fox 5 Atlanta which said that a strike “would be in no one’s best interest” and that the company was “baffled as to why union leadership would call one when we’re offering terms that would help our employees – some of whom average from $121,000 to $134,000 in total compensation – be even better off.

“We have offered the union terms that are consistent with what other CWA-represented employees have approved in recent contract negotiations; the company has reached 20 fair agreements since 2017 covering more than 89,000 employees. The Southeast contract covers fewer than 8 percent of our employees,” Kimberly said. “We’re prepared for a strike and in the event of a work stoppage, we will continue working hard to serve our customers.”

RCR Wireless News has reached out to AT&T for comment. The carrier recently ratified two contracts with CWA in other areas of the country: two Midwest Wireline agreements which cover 8,000 employees in  Illinois, Indiana, Michigan, Ohio, and Wisconsin; and a second agreement covering about 3,000 wireline employees across the country, including the U.S. Virgin Islands.

The post More than 20,000 AT&T workers on strike in the Southeast appeared first on RCR Wireless News.

Dear Members, Unprecedented, emotionally draining, scary, sad, or in other words Wow!  What a long, strange year is has been.  We hope that everyone is healthy and continues to stay that … END_OF_DOCUMENT_TOKEN_TO_BE_REPLACED