The Telecommunications Industry Association has started up a new standards task group that aims to develop industry best practices for edge data centers.

The work will update TIA’s existing TIA-942 standard — which was developed with large, centralized data centers in mind — to include requirements and guidelines for the design and installation of smaller, more distributed edge computing locations that will support 5G. Compared to traditional data centers, TIA said, edge data centers “can be small installations located on a streetlight box” and “come with a different set of issues including cybersecurity, physical security, location, connectivity, and resilience.”

The group will be co-chaired by Cindy Montstream, director of technical support and training at Legrand and Johnathan Jew, president of J&M Consultants. TIA is seeking industry participation in the group.

–LG Uplus is using Anritsu‘s Network Master Pro MT1000A to support expansion of its 5G service and the necessary fronthaul and backhaul networks. Anritsu said that as part of its 5G roll-out, LG Uplus wanted a mobile network measurement instrument with a 100G interface; the test company also noted that the instrument supports eCPRI and IEEE’s 1914.2 Radio over Ethernet standards as well.

-Research by Future Market Insights forecasts a 12.5%-year-over-year growth rate this year for network testers, boosting a market which reached a value of $7 billion in 2018. The study says concludes that although most network tester sales are centered around qualification and certification testing, the segment will see “spectacular growth in adoption for troubleshooting applications.” In particular, Future Market Insights cited the increase in fiber deployments to the home and other premises as a driver for the network tester market. 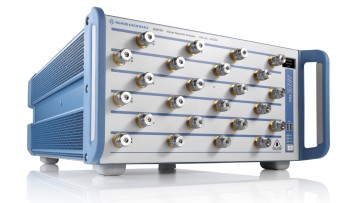 architecture that can be used to test 5G antenna arrays. Rohde said that the new R&S ZNBT40 supports frequencies between 100 kHz to 40 GHz and claims that the analyzer is the first VNA with that range plus up to 24 integrated ports. It can be used for testing of active and passive components for multi-antenna systems, including radar, or for simultaneous parallel measurements on multiple devices under test in a production setting. The company also launched the ZNBT26 for measurements up to 26.5 GHz.during h

With 5G wireless devices set to begin launching this year, Keysight noted, “the computer/server industry is actively working to upgrade and enhance network speed with advanced technologies such as 400G Ethernet” — which requires PCI Express 5.0 support, “as it is the only significant input/output (I/O) interconnect that has the throughput necessary to support the 400G interface.

–MTS reported fiscal first quarter results of $203.2 million, which reflected year-over-year growth in both the company’s test and simulation segment as well as its sensors business. Overall, revenues were up 4.6% from the same period last year. President and CEO Jeff Graves said that the company’s execution on its strategy to diversify and grow led to the quarter’s strong performance on that front. Net income was $10.5 million, down from the $33.1 million in profit reported at the same time last year. MTS reported a backlog of more than $500 million, which the company expects to fuel increased profitability this year.

MTS closed on its $80 million acquisition of simulation company E2M Technologies during the quarter as well.

Dear CWA Members, As I reflect on the many challenges we faced in 2021 due to the impact of COVID-19 and it’s variants, I am so thankful that we were able to host our two marquis events – The … END_OF_DOCUMENT_TOKEN_TO_BE_REPLACED