Tutela: ‘Unparalleled demands on the network’

5G may be the new kid on the block, but LTE is the workhorse of current networks — and Verizon’s LTE outperforms the rest in terms of consistent, high-quality user experience, according to new analysis from Tutela.

Tutela noted that a number of consumer usage trends, including the shift toward mobile-based streaming video and cheap unlimited data plans, mean that the industry is “in a time of unparalleled demands on the network.

“The new technology and new spectrum that 5G promises are clearly the long-term solution
to a step-change increase in demand, but for now, 4G LTE networks carry the vast majority of the burden in the United States,” Tutela concluded in its latest annual report on U.S. mobile networks.

Before we get into the numbers, let’s take a second to talk methodology. Tutela relies on crowd-sourced, device-based data measurements from software embedded in around 3,000 consumer applications. Tutela, which was acquired earlier this month by telecom market data firm Comlinkdata, said that the current report is based on more than 36 billion records, including more than 200 million speed test and 3.8 billion latency measurements made from more than 14 million iOS and Android devices across the U.S. between March 1 and August 31 of this year. Its tests include circumstances when a user’s plan or network congestion may result in impacts to performance — such as restrictions on video streaming. Tutela said it aims for testing and analysis reflects the typical user experience, rather than the peak of what can be achieved on a given network.

Verizon took the top spot in Excellent Consistent Quality; when its users had a signal, more than 80% of the time, that meant they were getting an experience which Tutela considers “excellent.” T-Mobile US came in second, 5% behind Verizon; followed by Sprint and then AT&T in fourth place. AT&T was the top-ranked carrier for Tutela’s Core Consistent Quality metric.

Tutela said that users in New Jersey, where Verizon is headquartered, “saw the highest single operator
performance in any state across the U.S.”: more than 86% of tests on Verizon’s networks met Tutela’s threshold for excellent performance. Verizon also ranked first in Tutela’s tests of download throughput, and tied with Sprint for first-place in the lowest network latency.

Among the other findings:

-Verizon customers spent the highest percentage of time on LTE, but for all four of the national carriers, users were on LTE more than 90% of the time.

-Tutela said that based on its data, AT&T’s FirstNet Band 14 coverage has doubled in the past year, which the company said helps to explain AT&T’s leadership in the core consistent quality metric. However, it was a narrow lead, and all the operators do well in that category. “When users have signal, mobile internet for Core use cases is nearly ubiquitous,” Tutela said.

-T-Mobile US had the top showing in upload throughput. 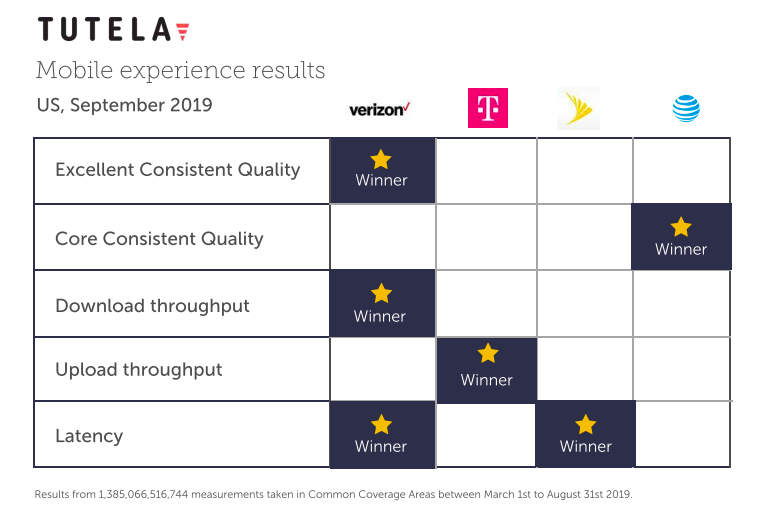 The above numbers are based on measurements taken from device in Common Coverage Areas. Tutela establishes those as places where at least three of the four national carriers provide coverage — it’s different than nationwide statistics. The Common Coverage Area analysis “is a way to measure network experience in places where users would expect operators to provide high-quality due to the direct, head-to-head competition,” the company said, adding that looking at tests in this way also “reduces the impact of a network’s coverage footprint, particularly in rural areas” on its overall performance. The areas of the country which are outside Common Coverage Areas tend to be the places which are most rural or difficult to cover, so there is a slight decrease in performance when those areas are included in nationwide results — and the biggest decreases hit AT&T and Verizon, because they have more users outside Common Coverage Areas.

And Tutela adds the caveat that even within Common Coverage Areas, its results “do not necessarily reflect performance across the entire region; instead it represents experience where users of a particular network have signal.”

Dear Members, Happy New Year! I am glad we have 2020 behind us and am looking forward to seeing you all in person in 2021. Yes, I fully expect we will gather face to face at some point … END_OF_DOCUMENT_TOKEN_TO_BE_REPLACED