5G in Switzerland: Country is ‘massively in the lead’

Speed testing authority Ookla maintains a handy global map tracking various categories of 5G deployments–pre-release, limited availability and commercial availability. Even the most topical glance would tell you that Europe clearly has most of the global 5G deployments and, with a bit of zooming, it’s apparent that Switzerland is hands-down ahead of the pack. As one vendor executive put it, Switzerland is “massively in the lead.”

Today Swisscom and Sunrise are both offering commercial 5G services, with the third national operator Salt working to launch sometime later this year. But before we take stock of where those operators are today and what’s coming, let’s look back at the recent spectrum auctions that set the stage.

Switzerland’s Federal Communications Commission (ComCom) has raised $379 million following a Jan. 29 to Feb. 7 auction. Licenses were awarded following a clock auction format, which allowed the bidders to bid on frequency blocks in all the available frequency categories simultaneously. ComCom said that the implementation of spectrum cap allowed the regulator to make sure that all mobile operators were able to acquire a wide range of 5G frequencies at reasonable prices.

“The frequencies will be assigned for 15 years, giving the operators long-term planning security to develop their networks. The outcome of the auction has been recorded in a decision that is contestable before the Federal Administrative Court,” ComCom said. “The awarding of frequencies is of key importance for the digitalization of Switzerland, and is in line with the Federal Council’s ‘Digital Switzerland’ strategy. In addition to powerful mobile communications, 5G will enable many new uses in future, including the internet of things, medical applications (eHealth), image processing applications (virtual reality, augmented reality) or self-driving vehicles. Switzerland is one of the first countries in Europe to already provide the 5G frequencies to network operators.”

Salt is working with Nokia to begin rolling out 5G this quarter. Nokia is supplying core and radio access network equipment based off of a deal signed in January. In terms of use cases and applications, the carrier called out video streaming and augmented and virtual reality for the consumer media market, and the internet of things for verticals including, smart cities, banking, manufacturing and tourism.

“We are committed to providing our customers with an outstanding customer experience and have identified Nokia as the right partner to deliver exceptional mobile experience,” Salt CEO Pascal Grieder said in a statement. “They convinced us not only through their advanced technological capabilities but also their reliability and security, which are paramount to Swiss private users as well as our country’s corporations.

“With Huawei’s innovative 5G solution and global hands-on 5G deployment experience, we are strongly confident to provide best user experience to our customers and become the number one 5G provider in Switzerland,” CEO Olaf Swantee said.

In April, Swisscom and Ericsson turned on a live 5G network in 5G cities and communities, including Zurich, Bern, Geneva, Basel, Lausanna and Lucerne. The company has reiterated its goal to have its 5G network operational all over Switzerland by the end of 2019, with close to 90% nationwide population coverage.

Swisscom highlighted 5G as an enabler for infotainment, gaming, VR and immersive media, as well as opportunities covered by the umbrella of Industry 4.0–the digital transformation of industries.

Swisscom CEO Urs Schaeppi said in a statement, “With the launch of the first commercial 5G network in Switzerland, we are laying the foundation for diverse, new applications and business models. This will not only be great for Switzerland but also inspiring for the people who will now be part of the digital world whether they are living in the city, countryside, or in the mountains.”

To achieve its coverage goal, Swisscom said it would work with Ericsson to use dynamic spectrum sharing (DSS), with Ericsson’s specific product offering referred to as Ericsson Spectrum Sharing. Ericsson Radio System gear sold since 2015 can support DSS via a software update. At a high-level, DSS allows an operator to simultaneously serve up LTE and 5G NR in the same band at the same time based on the needs of the end user.

To extend 5G coverage in low-, mid- and high-bands, “Classically I’d need to re-farm,” Ericsson’s Paul Challoner, head of network product solutions in North America, told RCR Wireless News in an interview. “What DSS does is allows me to use an existing LTE band to share that band dynamically…to support them both on that same band.”

He also pointed out that even if an operator had an empty band, they’d still have to add another radio or add an additional channel on an existing radio. DSS lets operators avoid those truck rolls and capex with its software-based functionality. Challoner said there would be “full software capability” for DSS by the end of the year. “We’re very excited about DSS and the capabilities that it brings.”

Comparing 5G in Switzerland to the rest of the world

In an analysis from OpenSignal published in July, he company looked at device-based data from eight countries and concluded that 5G speeds overall were “dramatically higher” than currently available peak download speeds on 4G networks.

The U.S. led the pack, with users experiencing peak 5G download speeds of 1.8 Gbps. In second place was Switzerland, with 5G peak speeds of 1.14 Gbps; the third-fastest 5G peak speeds were found in South Korea, clocking in at about 1 Gbps.

OpenSignal relies on crowd-sourced, device-based data and regular application servers for its information on user-experienced speeds, as opposed to test servers that may be located within an operator’s network. Data was collected between April 1 and June 30. 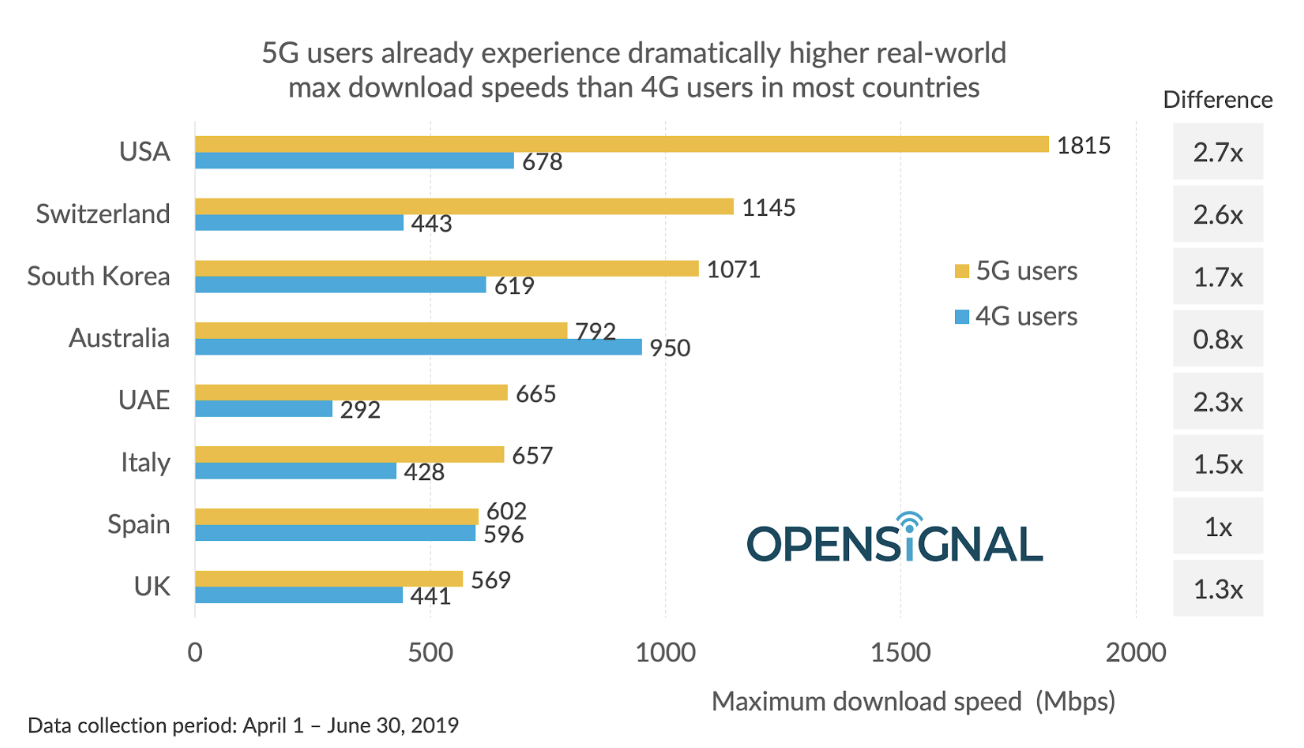 “It’s unsurprising to see that the current 5G maximum speed is so much greater in the US, because operators there are already able to use mmWave spectrum for 5G,” wrote Iain Fogg, who leads OpenSignal’s data analysis team, in a post on the new analysis. “This is extremely high capacity and extremely fast spectrum but has very limited coverage compared with the 3.4-3.8 GHz 5G ‘mid band’ spectrum typically used in most of the other countries we analyzed where mmWave spectrum is not yet available.”

However, OpenSignal did point out that as far as 5G goes, it is still early days, and the company expects 5G speeds to continue to get faster.

“This is just the start of the 5G era and the market is moving quickly,” Fogg wrote. “More 5G services will launch using more spectrum and wider channels — there are few 5G services currently using 5G’s ideal 100 MHz channel size — and 5G technology evolves to be able to combine the performance of multiple 5G channels and bands together to boost both the maximum and average 5G speeds and further improve the mobile user experience of 5G users.”

The post 5G in Switzerland: Country is ‘massively in the lead’ appeared first on RCR Wireless News.

Dear CWA Members, As I reflect on the many challenges we faced in 2021 due to the impact of COVID-19 and it’s variants, I am so thankful that we were able to host our two marquis events – The … END_OF_DOCUMENT_TOKEN_TO_BE_REPLACED