CBRS at the bat: Angel Stadium gets a pilot CBRS network 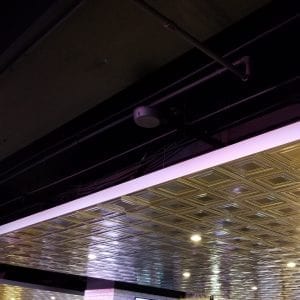 ANAHEIM, California — The sleek, matte-black oval of an antenna cover blends seamlessly into the background in the Don Julio club at Angel Stadium, despite being the star of the evening. It is transmitting a 3.5 GHz signal to enable a variety of what one presenter calls “IT mobilization”: untethering traditionally wired IT operations, such as security cameras and digital signage, and using CBRS-based private LTE to do it.

Connectivity Wireless, which also operates the stadium’s distributed antenna system, and JMA are responsible for the CBRS test network at the stadium, with partners including Motorola, Cradlepoint and Athonet, which is providing the core functionality. Connectivity manages the network.

While the test network at Angel Stadium is a single sector, it’s meant to show the potential that the technology holds as an alternative to Wi-Fi or wired Ethernet. One tables around the room are a pair of Motorola two-way radios, a TV screen for digital signage, a video camera and a pair of iPhones that are all able to operate on the CBRS network, providing data connectivity.

“I’m happy to say the system is working, and working very well indeed, said Connectivity Wireless’ VP of technology, Nader Famili, before taking a Motorola two-way radio handset and using it to speak to a colleague in another part of the stadium. When Connectivity was discussing potential CBRS use cases with the Angels organization, he said, those ranged from ways to support its internal operations within the stadium, all the way out to the parking lot outside.

Famili said that Connectivity can put a modem and access point in the parking lot and use the stadium’s CBRS network as backhaul, in order to provide fans with extended Wi-Fi coverage in the parking lot, without needing to put in a wired connection. “That’s great functionality,” he said.

JMA will be operating a live CBRS network on the show floor this week at Mobile World Congress Los Angeles. Todd Landry, corporate VP of product and market strategy for JMA, said that IT mobilization use cases go beyond simply enabling smartphones with CBRS.

“This is the first time we’re taking this kind of spectrum and kind of opening it up to the private sector to do what you want with it,” Landry said at the event. The 150 megahertz of CBRS spectrum is “about as much as every mobile operator has available to use in the cache of low-band spectrum,” he noted, “So that’s a fair amount of spectrum to build a lot of capabilities off of.”

Seven 10-megahertz CBRS Priority Access Licenses will be auctioned next year by the Federal Communications Commission, in addition to the 80 megahertz of spectrum available under General Authorized Access, which does not require the purchase of a license.

The post CBRS at the bat: Angel Stadium gets a pilot CBRS network appeared first on RCR Wireless News.

Dear CWA Members, As I reflect on the many challenges we faced in 2021 due to the impact of COVID-19 and it’s variants, I am so thankful that we were able to host our two marquis events – The … END_OF_DOCUMENT_TOKEN_TO_BE_REPLACED