Much of the activity on 5G spectrum in the US to date has focused on millimeter (mmWave) spectrum, but it is not clear that mmWave spectrum will be suitable for mobile 5G network deployment in the near to mid-term future. High-band spectrum offers higher speeds and more capacity due to the amount of unused spectrum available at these frequencies, but mmWave is limited in geographic coverage needed for mobile deployments.  Low and mid-band wireless signals travel further and penetrate obstacles like buildings better than high-band spectrum. As per Ericsson’s June 2018 Mobility Report “In general, all the current 3GPP bands including low bands (600 MHz, 700 MHz, 800 MHz, 850 MHz and 900 MHz) and mid-bands (1.5 GHz, 1.7 GHz, 1.8 GHz, 1.9 GHz, 2.1 GHz, 2.3 GHz and 2.6 GHz) are being considered for 5G services in the future”.

Wireless 20/20 has published a 2019 update of its report Spectrum Strategies for 5G, examining the current state of the spectrum availability as it applies to 5G Fixed and Mobile Broadband deployments.  This report focuses on the state of the sub-6GHz spectrum availability as it applies to 5G mobile deployments in the US.  By asking “What spectrum bands will US operators use for Mobile 5G?”, this analysis examines not only the current spectrum holdings of the top 4 US mobile operators, but also, the potential availability of suitable spectrum for mobile 5G deployment in the US.  This updated report provides an overview of the dependencies between the 5G applications, spectrum requirements and spectrum ranges in a way that may be attractive for the deployment of 5G Fixed and Mobile broadband services. The following chart presents the key potential 5G spectrum bands included in the 5GNR NSA specification and identified by 5G Americas. 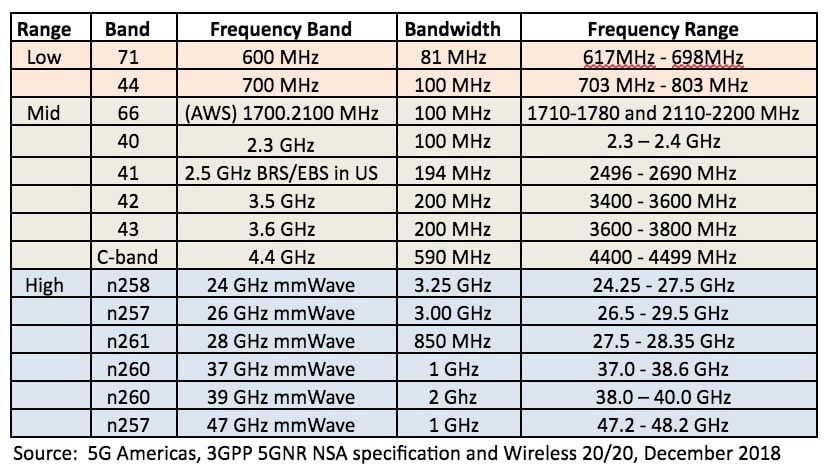 The FCC is currently conducting its first 5G spectrum auctions in the 28 GHz and 24 GHz bands.

After 152 rounds of bidding activity in the FCC’s Auction 101 for 28 GHz spectrum, the total amount of provisionally winning bids has surpassed $700 million as of January 21, 2019.  The 28GHz auction is “predominantly a Verizon auction” since Verizon already owns 76% the nation’s 28GHz spectrum covering fully 258 million POPs, thanks to its acquisition of XO Communications that closed in 2017.
T-Mobile also acquired 28 GHz spectrum licenses covering a total of 100 million POPs through its 2013 acquisition of MetroPCS.   Although most of this mmWave spectrum is currently used for wireless backhaul, T-Mobile owns roughly 20% of the commercial 28 GHz band in New York City, while Verizon owns the remaining 80%.  In addition to Verizon, AT&T, T-Mobile, US Cellular, Frontier, Windstream and a host of smaller and rural telcos were qualified to bid in the ongoing 28GHz auction.

Auction 101 will be followed by Auction 102 for virtually nationwide spectrum in the 24 GHz band offering licenses in key locations like Chicago, New York City, Boston and Los Angeles. Licenses in the upcoming 24GHz Auction 102 will be available in Partial Economic Area geographic sizes, which means they are much larger than the county-size licenses in the 28GHz auction.  With the completion of these two auctions, the FCC will have made 1.55 GHz of mmWave spectrum available for 5G. The FCC also plans to auction the upper 37 GHz, 39 GHz, and 47 GHz bands later in 2019. In addition, the FCC is working to free up another 2.75 gigahertz of 5G spectrum in the 26 and 42 GHz bands by 2020. With the completion of these auctions, the FCC will release nearly 5 GHz of 5G high-band mmWave spectrum into the market—more than all other flexible use bands combined.

The FCC ultimately plans to make low- and mid-band licensed spectrum available for 5G services. However, the FCC has yet to lay out a clear strategy for allocating additional sub-6GHz spectrum for 5G.  A balanced portfolio of 5G licensed and unlicensed high, medium and low range spectrum will be required to support 5G network deployments over the next decade. This makes 2019 an even more critical year to start planning and allocating harmonized 5G spectrum in the low- and mid-bands.  Wireless 20/20 believes that it is critical for the FCC to allocate Low and Mid band spectrum for mobile 5G if the US wants to lead the World in the 5G Era.

We consider a spectrum to be suitable for 5G deployment if it consists of a minimum of 100 MHz of bandwidth, because, in order to deliver speeds close to 1Gbps, 100 MHz will be needed if an efficient modulation scheme is used that produced 10bits/Hz, assuming TDD technology.  By this definition, currently neither AT&T, Verizon nor T-Mobile controls enough sub-6GHz spectrum that is suitable for mobile 5G network deployment.

For Verizon, the most logical approach would be to partner with DISH and combine DISH’s AWS-4 spectrum with its own and thereby control a large chunk of 1700 / 2100 MHz spectrum for 5G (see Exhibit 4).  DISH has to meet certain FCC-designated buildout requirements or it will risk having to forfeit these valuable spectrum licenses. DISH Network recently announced plans to deploy a neutral host 5G cellular NB-IoT network starting with an investment of $500 million to $1 billion by March 2020, a date that coincides with the FCC requirement that, Dish must build out the spectrum to 70% of its license territory by March 2020.  Dish has positioned the cellular NB-IoT network as the first phase in the deployment of a standalone neutral host 5G network using the unused low and mid-band acquired over the period from 2008-2014. In July 2018, the FCC requested updates and more detailed information on DISH buildout plans for the 50+ MHz of low- and mid-band spectrum that is apparently lying fallow in these bands.

AT&T is currently promoting the availability of 5G Evolution in parts of a dozen cities during spring 2019 using existing LTE spectrum and advanced LTE network technologies such as 4×4 MIMO and 256 QAM.  By early 2020, AT&T expects to have a standards-based, nationwide mobile 5G network using its low band spectrum (sub-6 GHz), while also offering 5G+ coverage over millimeter wave spectrum. But if the Mobile 5G promise is to be met by the 2020 timeframe, additional sub 6-GHz spectrum will be necessary.  AT&T could enter a bidding war with Verizon over DISH spectrum or consider lobbying the FCC to open new sub-6 GHz 5G spectrum (which could be 2.5 GHz, 3.5 GHz, 4 GHz or 6 GHz).

T-Mobile participated in the 600 MHz auction and was able to secure an average of 30 MHz of this low-band spectrum in many markets nationwide.  As of yearend 2018, T-Mobile has deployed an Extended Range LTE network using its 600 MHz in more than 1,250 cities and towns throughout 36 states.
T-Mobile has also been working with Nokia to complete tests of 5G data transmission over its 600MHz radio spectrum setting the stage for a broad and potentially fast rollout of 5G services across the US.

Although there is 70 MHz of total available bandwidth in the 600 MHz Band 71, this is clearly not enough by itself for mobile 5G network deployment.  For T-Mobile, it could increase its effort to lobby the FCC to assign the 3.5 GHz spectrum band for 5G. If successful, this will give T-Mobile a chance to acquire new, and relatively unencumbered spectrum suitable for 5G.  Otherwise it could join AT&T in lobbying for new 5G spectrum in the 4 GHz or 6 GHz bands.

Only Sprint has the 100 MHz of bandwidth in the 2.5 GHz spectrum band that could support 5G deployment with user downlink speeds that could deliver 1Gbps service.   Sprint controls around 120 MHz of 2.5 GHz spectrum in 90 percent of the top 100 U.S. markets, and the 2.5 GHz spectrum band is included in the Non-Standalone 3GPP 5G NR specification (initial part of Release 15).  For Sprint, the most logical approach would be to work with other 2.5 GHz spectrum owners and essentially control a contiguous 200 MHz of spectrum from 2496 – 2590 MHz in the USA. Sprint currently controls around 120 MHz of 2.5 GHz TDD spectrum in 90 percent of the top 100 U.S. markets The FCC has already issued an NPRM to extend the geographic coverage of 2.5 GHz EBS spectrum to county boundaries and issue additional licenses in existing white spaces.

A major factor is whether T-Mobile and Sprint merger will be approved.  The combined company would have an average of 319 MHz of sub 6 GHz spectrum in the top 50 markets. By comparison, AT&T has
177 MHz and Verizon has 114 MHz.  As such, the FCC and Department of Justice may require T-Mobile/Sprint to divest some of their spectrum holdings as a condition for approval of their proposed merger. As a concession to obtain approval of the proposed merger, T-Mobile/Sprint may offer to divest some of Sprint’s leases of “EBS” spectrum in the 2.5 GHz band. This divestiture would make FCC Commissioner Jessica Rosenworcel’s recent proposal to hold a voluntary incentive auction for EBS licenses in the 2.5 GHz band more compelling.  The Commissioner’s proposal recognizes that the 2.5 GHz spectrum band has the choice mix of propagation and capacity that are essential for widespread 5G deployment.

Wireless 20/20 is developing a comprehensive plan for transitioning more than 100 MHz of prime 2.5 GHz EBS spectrum to commercial use through an incentive auction for commercial 5G mobile and fixed broadband uses in both urban and rural areas.  In our new report, Spectrum Strategies for 5G: 2019 Update, Wireless 2020 argues that it is critical for the FCC to allocate more Low- and Mid-band spectrum for mobile 5G if the US wants to lead the world in the 5G Era.

Dear CWA Members, As I reflect on the many challenges we faced in 2021 due to the impact of COVID-19 and it’s variants, I am so thankful that we were able to host our two marquis events – The … END_OF_DOCUMENT_TOKEN_TO_BE_REPLACED