BARCELONA — Sprint laid out the plans for its initial 5G roll-out in the second half of 2019 — and offer 5G access to Google Fi, which has had a mobile virtual network operator arrangement with Sprint since 2015.

Sprint CTO John Saw gave a glimpse at the carrier’s initial 5G New Radio network footprint in its first metro markets, highlighting Chicago in particular. Sprint is deploying its 2.5 GHz spectrum and massive multiple-input multiple-output technology that can support both LTE and 5G simultaneously — and that means that Sprint’s 5G footprint will overlap its LTE footprint at 2.5 GHz, Saw noted, with much greater range than millimeter wave-based 5G. The carrier is using that greater range to claim that it will have the first “real” mobile 5G network when it launches later this year.

Asked about that claim, Saw said that Sprint’s network will be the first “real mobile 5G in the U.S., with real coverage, with real devices, with a real value proposition — which, I think that’s a real commercial launch that’s relevant for consumers.” 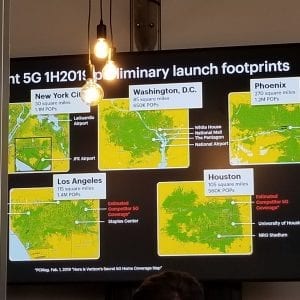 Those footprints typically cover the local airport and/or large local sports venues, according to Sprint’s slides, and the carrier said that it “plans to offer coverage in the downtown area of these cities for its highly mobile, on-the-go customers.”

Saw also couldn’t resist a dig at how some competitors are marketing 5G, saying that over the past year, Sprint has learned that “there’s more than one way to build a 5G network. We also learned that some 5G networks are built by a marketing department.”

In terms of monetizing 5G, Sprint CMO Roger Solé said that there were three areas that the carrier was targeting to make a short-term impact: augmented and virtual reality; a better video experience than is available via LTE; and mobile gaming. Solé cited numbers that nearly 180 million Americans use their mobile phones to play games, including 60% of men and 58% of women — a far higher, and more equal, figure than play games via game consoles. 5G, he said, will change the way that people purchase games: moving from the one-time purchase of an application or hard copy of a game, to streaming access to a wide variety of games; and moving form solo play to social, or multi-player games. Sprint is partnering with streaming game provider Hatch to offer access to “premium mobile games,” with the app integrated into its 5G handsets.

Sprint will also offer up 5G network access to customer of Google Fi, Google’s wireless service. Sprint said in a press release that its use of massive MIMO means that “there will be a dramatic increase in network capacity and density” and that it will allow Google Fi customers — with compatible phones, who are in a 5G coverage area — to automatically connect to the 5G network, “quite similar to today’s seamless transitions between cellular networks, depending on the location.”

Sprint and T-Mobile US executives have repeatedly emphasized how much additional capacity their combined network will offer and used it as a selling point for the merger, claiming that the boost in “supply” of high-speed wireless broadband will enable them to compete on price and that it should also calm fears about whether the combined company would continue Sprint’s offerings for the wholesale/MVNO market or its participation in the federal Lifeline program that helps low-income families afford wireless service — because the additional capacity will mean that the company seeks customers to fill it.

Dear CWA Members, As I reflect on the many challenges we faced in 2021 due to the impact of COVID-19 and it’s variants, I am so thankful that we were able to host our two marquis events – The … END_OF_DOCUMENT_TOKEN_TO_BE_REPLACED