NEW YORK–Four years ago, a 5G demo from Sprint and Nokia involved a van-sized base station and a test device the size of a small refrigerator.

By the time Sprint officially launched 5G service in New York City on Monday, the base station equipment had shrunk to the size of a briefcase, and the demo devices were the epitome of the modern flagship 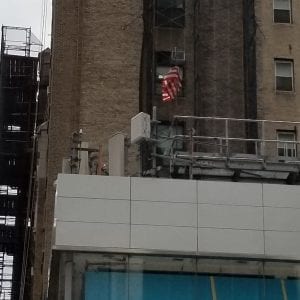 Sprint has now launched all nine of the 5G markets that it committed to at this year’s Mobile World Congress Barcelona. This week, it officially adds New York City, Washington, D.C., Los Angeles and Phoenix, Arizona to its active 5G markets and achieves the largest U.S. 5G network footprint: more than 2,100 square miles, with a covered population of about 11 million people. It now has four 5G devices in its line-up, a combination of smartphones and a mobile hot spot, and it is offering a new, premium mobile gaming service on 5G plans.

At the company’s launch event in Manhattan on Monday, executives detailed the massive effort that it has taken to put the network, devices and services in place. At MWC Barcelona, Sprint CEO Michel Combes and CTO John Saw had laid out an ambitious plan to turn up extensive 5G coverage in nine U.S. markets by the end of the first half of 2019, using the company’s hefty spectrum holdings at 2.5 GHz and massive multiple-input multiple-output network equipment that can run 5G New Radio and LTE simultaneously, essentially allowing Sprint to replicate its LTE footprint with 5G without adding new sites.

The carrier missed that self-imposed deadline by a few weeks, but Combes and Saw shrugged off the slight delay in the overall context of the deployment.

“One or two weeks doesn’t really change anything in what we’re trying to achieve.”

“The announcement was the easiest part,” Saw said wryly. “The rest of it was a tough slog.” He said that the challenge wasn’t really on the coverage side, it was in making sure that the new 5G technology features worked. ENDC, or E-UTRAN New Radio – Dual Connectivity, was particularly tricky.

“You’re blasting two different technologies, LTE and NR, and your phone has to consolidate the two signals and combine them, and get it right. That is really hard to do, as we learned,” he said. “It’s like trying to catch two fly balls at the same time, with one glove, and do it correctly a billion times a second.”

The coverage in Manhattan was particularly challenging, according to Ricky Corker, president of customer operations for the Americas for Nokia, because the New York City market is three- to four-times more dense than any other market in North America. Achieving high 5G speeds at street level, he said, is “an amazing feat, and one we’re very proud of.”

Sprint added a new 5G device to its lineup, along with the new 5G markets. This one is an exclusive offering from Chinese device manufacturer OnePlus, the OnePlus 7 Pro 5G. It has a 48 megapixel rear camera, a pop-up 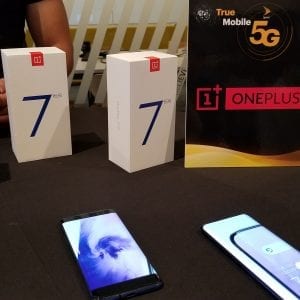 selfie camera and a “Warp Charge” fast-charging feature. The 7 Pro goes on sale in select retail locations today and will be available in all nine of Sprint’s initial 5G markets as of September 6, according to Ryan Sullivan, Sprint’s VP of product engineering and development. As far as plans, Sprint is offering its Unlimited Premium option for 5G subscribers that runs $80 per month and includes features such as access to Hulu, Tidal music streaming, Amazon Prime, Lookout device security, “full HD streaming” and 100 GB of mobile hot spot data (after which hot spot use is restricted to 3G speeds).

That plan also includes three free months of a subscription to the first cloud-based, mobile gaming service aimed at 5G users: Hatch. Hatch co-founder and Chief Commercial Officer Vesa Jutila was on-hand at the Sprint 5G launch, demonstrating how the service is used and some of its attributes, including fast-start up from an on-screen widget and a real-time leaderboard feature that alerts high scorers when their score has been passed by someone else. 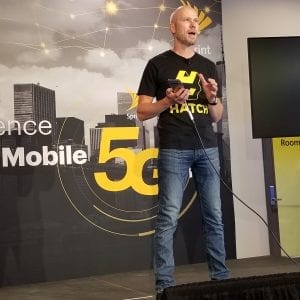 “Gaming is mainstream entertainment,” Jutila said, adding that 60% of people who play games do so on mobile devices and nearly half of them are female.

The mobile gaming business is growing faster than stationary gaming, Jutila said, and Hatch worked to invest and tailor the experience toward 5G.

“Finally, it’s going to be possible to stream games as easily as music and movies,” he said.

The mobile gaming use case has been one that many industry observers believe will be important in early adoption of 5G, because it represents an area where users are likely to be willing to pay a premium for high speed and low latency. Hatch has also launched its 5G-optimized gaming service with Vodafone in Germany and on Samsung devices in South Korea.

So what’s next for Sprint 5G? Combes said the company will focus on strengthening its first nine markets. In his remarks at the NYC launch, he balanced showcasing Sprint’s achievement in bringing its 5G network to fruition on its own, with emphasis that the company needs its merger with T-Mobile US to go through in order to bring similar services to life on a national scale. The merger, Combes said, will provide the combined company with the spectrum holdings, the financial resources and the scale that it needs to take 5G national.

“We need to merge T-Mobile and Sprint as soon as possible, so we can super-charge 5G, in order that what you see today … then will be possible around the country,” Combes said.

Dear CWA Members, As I reflect on the many challenges we faced in 2021 due to the impact of COVID-19 and it’s variants, I am so thankful that we were able to host our two marquis events – The … END_OF_DOCUMENT_TOKEN_TO_BE_REPLACED