With support from Intel and Ericsson, T-Mobile US says it has completed the first 5G data and video calls using 600 MHz spectrum, as it aims to build out nationwide availability of 5G service by 2020.

The calls were conducted on a live, commercial network, according to T-Mobile US, which has repeatedly emphasized the importance of its 600 MHz spectrum holdings to its plan to deploy 5G across the country. T-Mo also played up the spectrum position that it will have in low- mid-band and high-band spectrum for 5G deployment if its proposed merger with Sprint is approved.

“Low-band 600 MHz spectrum delivers a broad layer of 5G and provides much-needed balance to millimeter wave (mmW) – which is an important piece of the 5G puzzle – but has limited coverage (less than a square mile) and is unable to pass through most objects, like walls,” T-Mobile US said in a statement on its tests.

T-Mobile US said that during the tests, its teams “generated a 5G signal capable of covering more than a thousand square miles from a single tower”.

T-Mobile US CEO John Legere tweeted that “Unlike the other guys, T-Mobile is using low-band, mid-band and mmW to create a true nationwide 5G network that ACTUALLY WORKS when you cross the street!”

We were the world’s first to complete a #5G video call on 600 MHz! Only the New @TMobile will make a nationwide #5G network happen and our 600 MHz spectrum is key. More Info:https://t.co/XsES9nR715 https://t.co/iHTDg80CPX

T-Mobile US is highlighting the comparative propagation of 600 MHz and mmWave for 5G at the Consumer Electronics Show this week.

Even as T-Mobile US ramps up its 5G network preparation, a recent U.S. survey that it headed up, looking at consumer attitudes and expectations around 5G, shows that for the moment at least, wireless carriers — including T-Mo itself — aren’t the perceived leaders in 5G technologies. The 5,000 U.S. survey respondents, when asked to name top-of-mind leaders in 5G, were much more likely to grant that cachet to tech companies Apple and Google, followed by LG and larger carriers such as Verizon and AT&T, as well as other tech players such as Intel, Amazon and Samsung. 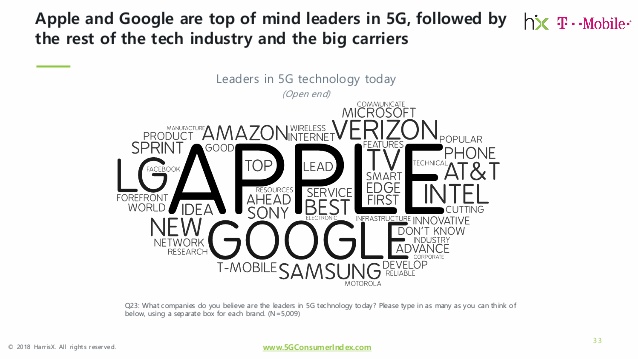 Dear Members, Unprecedented, emotionally draining, scary, sad, or in other words Wow!  What a long, strange year is has been.  We hope that everyone is healthy and continues to stay that … END_OF_DOCUMENT_TOKEN_TO_BE_REPLACED