Remember when murder hornets were peak 2020? Whatever happened to them, anyway? Well, the Washington Department of Agriculture has been trying to find their nests in order to eradicate the striped beasties before they can get more than a foothold in the Pacific Northwest. They’ve done this by trapping live hornets and attaching tiny Bluetooth sensors to them, then releasing the hornets and using smartphones and antennas to track them as they return to the nest.

Last Saturday, entomologists eradicated their first murder hornet nest found in such a manner, two days after they located it in Blaine, Washington. The department held a virtual press conference this week on their success, and released photos of the work.

“We found one, and we took it out, so we’re all pretty happy here,” said Sven Spichiger, managing entomologist.

Murder hornets — or more formally, Asian giant hornets — are the largest species of hornet and prey on honeybee hives. As WSDA describes it, “A few hornets can destroy a hive in a matter of hours. The hornets enter a ‘slaughter phase’ where they kill bees by decapitating them. They then defend the hive as their own, taking the brood to feed their own young.” While the hornets attack other insects, WSDA said, they don’t decimate other insects to the same extent that they do honeybees.

On October 21, WSDA said, a WSDA trapper collected two Asian giant hornets from a new type of trap that the agency had placed in the area. Another two live hornets were found the next day, when WSDA staff arrived in the area to tag the first two trapped hornets with Bluetooth radio trackers, so that they could follow one back to the nest. 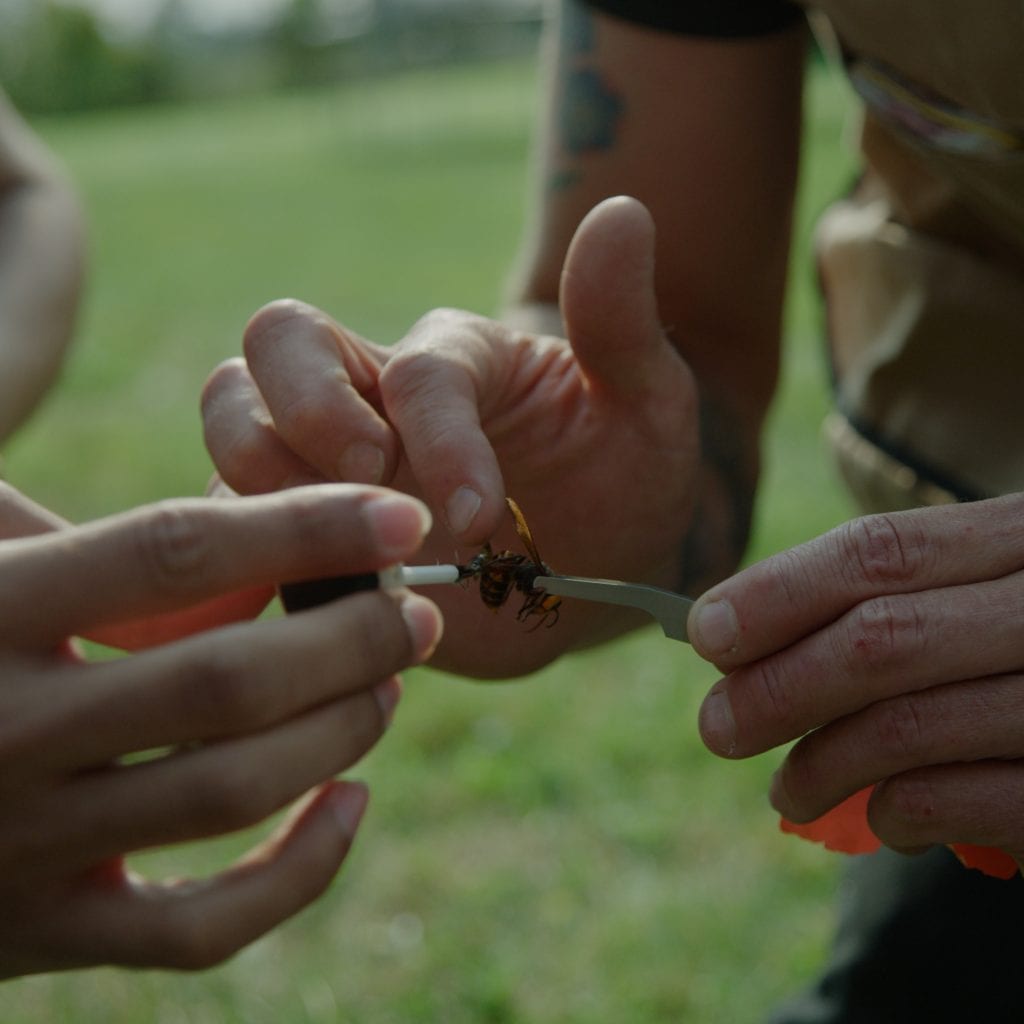 Tracker being glued to a hornet. Image: Washington State Dept. of Agriculture

The entomologists were able to attach Bluetooth trackers to three hornets. They made two tracking attempts, and the second one led them to the discovery of the nest, which was found about 4 p.m. on Oct. 22. 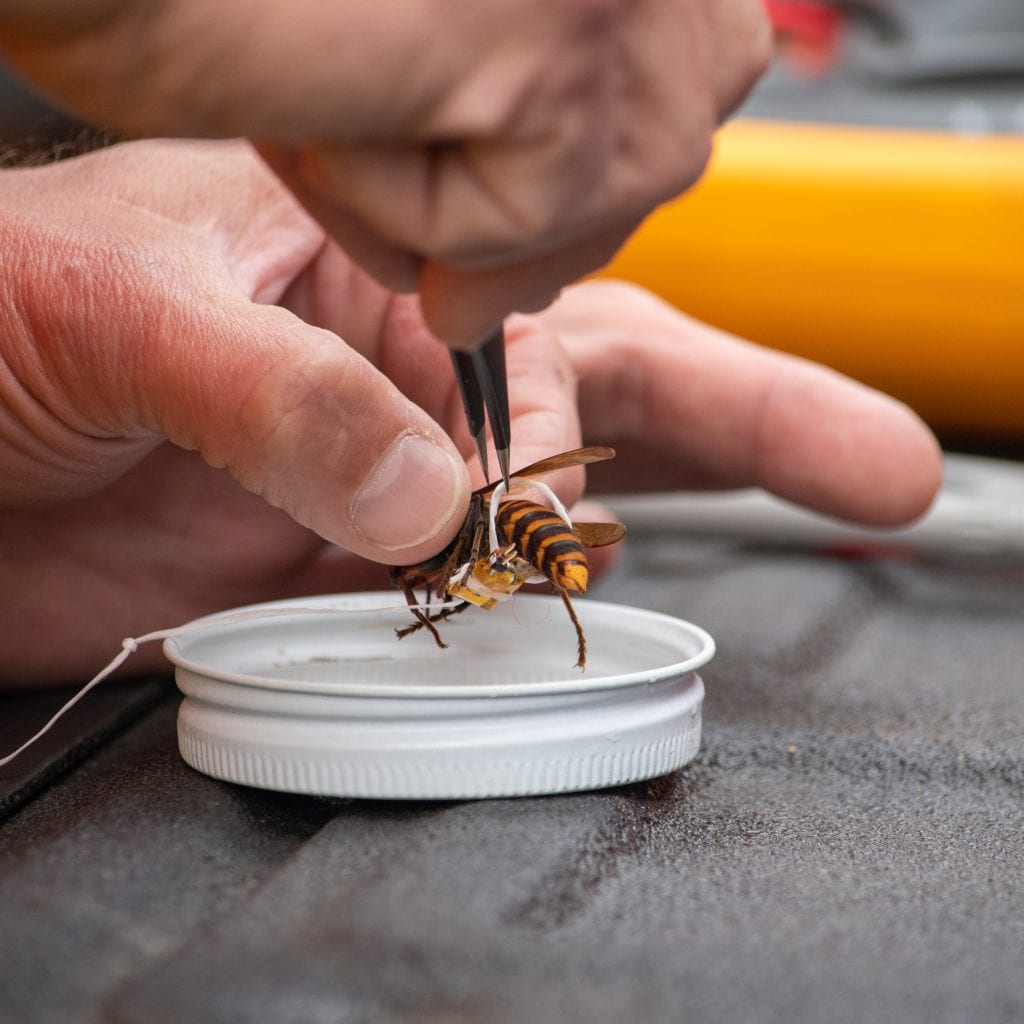 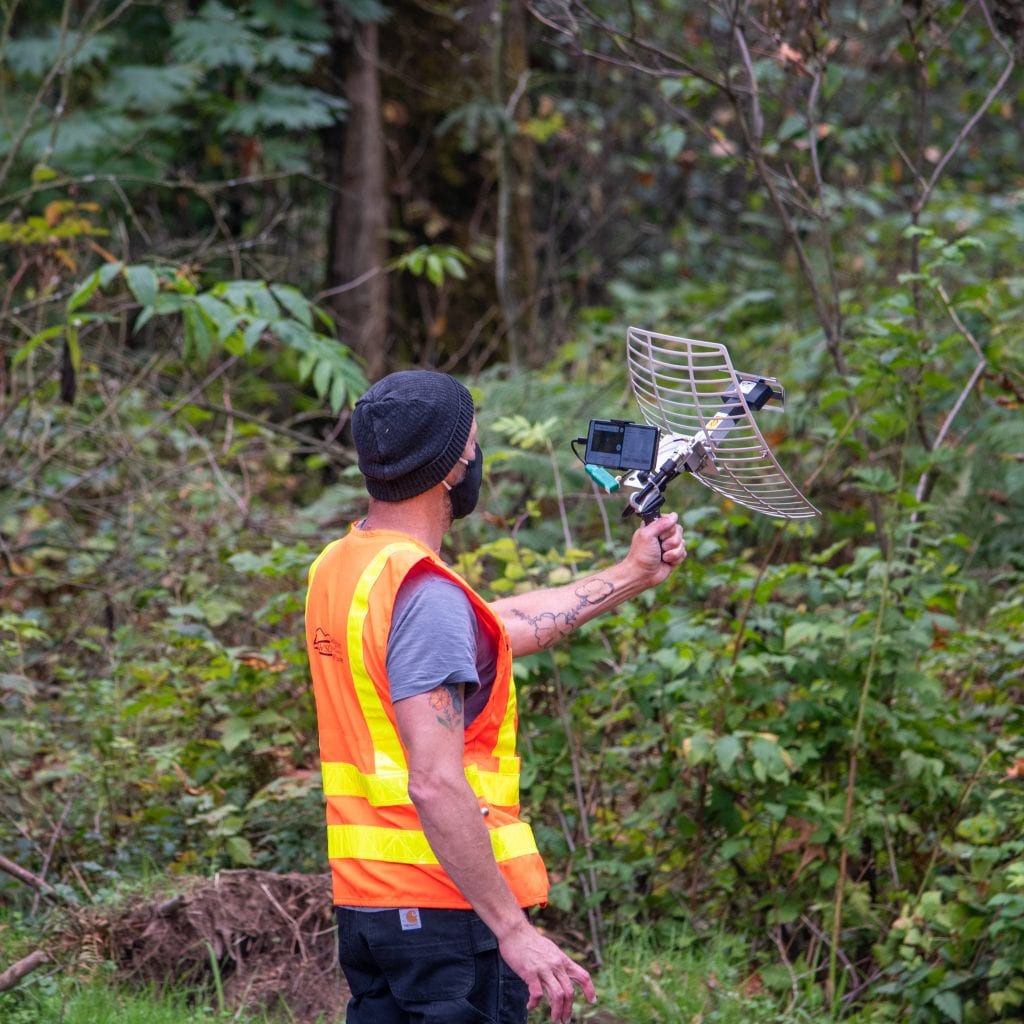 Although the Asian giant hornets usually nest in the ground, this particular nest was inside a tree cavity at about eight to ten feet above the ground, on private property near an area that had been cleared for a residential home, WSDA said.

“Dozens of the hornets were seen entering and exiting the tree while the WSDA team was present,” the agency said.

At about 5:30 a.m. last Saturday, entomologists from the WSDA’s Pest Program suited up with protective gear and began taking out the nest. They set up scaffolding in order to be able to reach it, then bracketed the nest with dense foam in order to leave a single entrance and inserted a vacuum hose to remove hornets from the nest, ultimately vacuuming out 85 hornets. Another 13 were captured outside the nest with nets.

“The work proceeded slowly at first, with very few hornets emerging,” WSDA recounted. “The team members used a wooden board and some smart whacks against the tree to encourage more hornets to leave the nest. This proved successful.”

When no more hornets came out, they pumped pumped carbon dioxide into the tree to kill or anesthetize any that remained. Then the team sealed the tree with spray foam, wrapped it with cellophane, and finally placed traps nearby to catch any stragglers. By 9 a.m., they had taken out the first known murder hornet nest in the U.S.

WSDA has cut down the tree and opened it, to see how big the nest was and whether the hive had begun to produce new queens. They’ll continue to set traps through at least this month, hoping to catch any other hornets that remain and potentially locate any other active nests. They do suspect that other nests exist, and it’s the time of year when new queens begin to emerge — so quickly locating and exterminating nests is key. They encourage Washington residents to report hornet sightings; a resident’s report in September ultimately helped the WSDA team find and exterminate the first nest.

“This weekend’s successful operation is due in large part to the careful planning and hard work of our Pest Program team,” said WSDA director Derek Sandison. “I also want thank the landowners, all those who have reported Asian giant hornet sightings to us, and the citizen scientists who set traps, as well as staff with the U.S. Department of Agriculture, Washington State University, and the University of Washington who have assisted in these efforts.”

Dear Members, Unprecedented, emotionally draining, scary, sad, or in other words Wow!  What a long, strange year is has been.  We hope that everyone is healthy and continues to stay that … END_OF_DOCUMENT_TOKEN_TO_BE_REPLACED